One Answer to Gas Crunch – Get A Horse
By Mark ForstLos Angeles Times
May 8. 1979 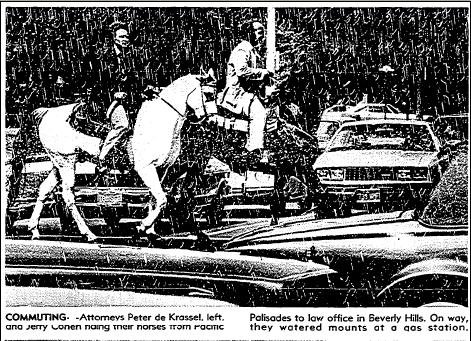 While other motorists wrestled with long lines at gas pumps Monday, Peter de Krassel and Jerry Cohen found no problems when they pulled into a station on the way to work.

But the two Beverly Hills attorneys were after water, not gas, and it was for their two horses, not their cars. In protest against lengthening lines and escalating gas prices, de Krassel and Cohen rode their hoses on a two-hour, eight mile trip from their Pacific Palisades homes to their Beverly Hills office.

“It’s a good way to symbolically express our frustrations at being ridden into gas lines by Arabs,” de Krassel said, patting his Arabian horse, Hershel, who was hitched to a parking meter next to Cohen’s horse, Missy.

De Krassel, 32, said he got the idea while caught in a gas line Friday: “I was so mad at the Arab riding me into this (a gas line), I thought, ‘I have an Arabian at home. Why not ride him?’” To make sure the symbolism wasn’t lost, the law partners renamed Hershel “Mister Opec” and dubbed Missy “Abu Dhabi” after the Persian Gulf oil sheikdom. The two men drew curious stares and varied responses from passing motorists during their ride that took them down a jogger’s path on San Vicente Blvd in Santa Monica through the Veterans Administration hospital grounds in West Los Angeles and along railroad tracks running through Century City to Beverly Hills.

Some of the angrier glares came from motorists wanting to park in spots occupied by Hershel and Missy peacefully slurping water from a bucket. “Horses don’t belong in Beverly Hills,” on surprised driver told de Krassel and Cohen. Despite laws against horseback riding along streets in Santa Monica, Los Angeles, and Beverly Hills, the two lawyers said they encountered no traffic or legal problems on their journey. And they were careful to put money in the two-hour parking meter.

De Krassel estimated he saved 1 1/2 gallons of gas normally burned by his MG on the drive to the office. Cohen, 40, said he saved about 4 gallons by leaving his Cadillac in the garage. But the men planned to put the horses in a trailer for their return trip, virtually negating any gas savings.

De Krassel said he planned to petition the three cities he rode through to temporarily drop their bans on horseback riding. If that happens, the attorney said, he would like to ride round trip to work maybe three times a week.

On November 3rd, 2005 I re-enacted my horseback “protest” ride, which I did once before back in May of 1979, along historic San Vicente Blvd, although this time I did it in reverse. I did this ride again to symbolize the backwardness of government energy policies the last three decades, the serious crisis facing the United States over the high cost of gasoline, and the obscene multi-billion dollar oil company profits. I am calling for an end to “deregulation” of energy.

The American people need to wake up and take control of their lives by fighting the multi-national oil companies who are destroying the U.S. economy.

Political contributions from utility and oil companies should be banned. The proposed hearings on oil profits in Washington are a sham. The solution is not hearings but action and legislation. Hearings were held during the 1970’s energy crisis, in 1980 and 2000 with the same results — the consumer stuck with higher energy costs!. We’ve been hijacked. It’s time to end deregulation and throw the bums out of office.