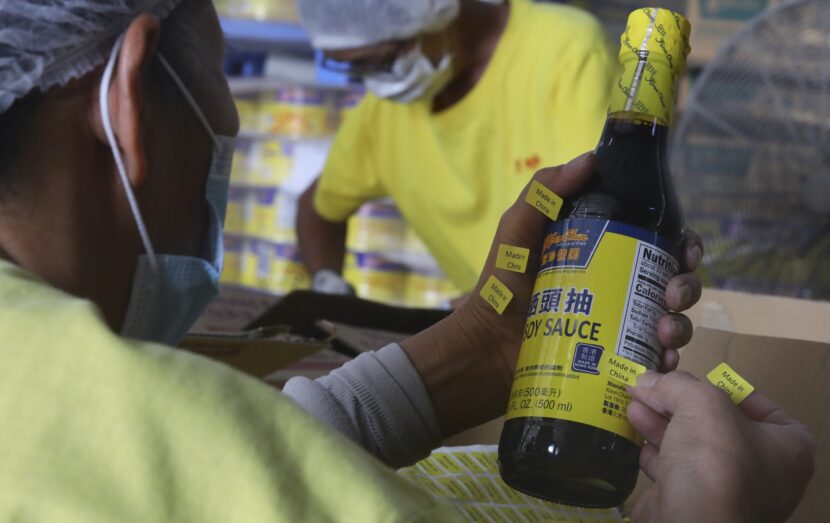 Workers at Koon Chun Hing Kee Soy & Sauce Factory in Yuen Long add “Made in China” labels to products to be exported to the US.
Photo: Dickson Lee

In the ongoing saga of the US presidential election, a question vital to Hong Kong looms large: will President Donald Trump’s successor, Joe Biden, restore the special trade status the city was granted under the 1992 Hong Kong Policy Act?

Many in the Republican camp think he might, as they believe Biden is of a socialist mindset and has deep China connections. They purposely overlook that the US-Hong Kong Policy Act was actually signed into law by Republican president George H.W. Bush, two years after China’s National People’s Congress approved the Basic Law for Hong Kong.

There was much optimism then; Deng Xiaoping, who devised the “one country, two systems”

principle, was in command, and many believed Hong Kong was Deng’s experiment for China to move towards political liberalisation. Thus, the US-Hong Kong Policy Act had political intent.

The hope was that granting this new special administrative region of China special trading privileges would encourage Beijing not to renege on its promise to let Hongkongers rule Hong Kong with “a high degree of autonomy” – preserving civil liberties.

This particular Hong Kong policy might not, however, have been a solely American initiative. Britain and other Western democracies that seek to maintain their bases in Hong Kong and enhance trade with China may have had a hand in persuading Bush. Thus, the arrangement to make Hong Kong a separate customs territory from China was also adopted by the World Trade Organization.

Today, the climate has changed; there is increasing evidence that Beijing will not risk national interests and let Hong Kong shape the future of the country, whatever some foreign powers and pro-democracy elements in Hong Kong may desire.

In this situation, Washington and Trump fans in Hong Kong should take a step back and consider if the move to treat Hong Kong like any other part of China has done them any good. Hong Kong is caught between the leaders of the world’s two largest economies.

Trump’s America is far from what the US once was. For Trump, it is “America first”. For Chinese President Xi Jinping, Deng’s thoughts are not of paramount importance. Xi’s goal is to bring back into the fold, on his terms, every inch of  territory Beijing considers its own

Against these realities, Trump has made a huge mistake. His move to revoke Hong Kong’s special status – which has led to the requirement that Hong Kong products exported to the US are labelled “Made in China”, rather than “Made in Hong Kong” – is wrong. It is questionable legally, politically short-sighted and not in America’s best long-term interest.

Hong Kong is an independent customs territory and a separate member of the WTO, which has rules against discrimination. Hong Kong is challenging the US labelling decision, following a

WTO ruling that the US tariff war on China broke trade rules.

Soon after Washington announced the labelling requirement in August, Hong Kong made a complaint to the Office of the US Trade Representative, demanding that it drop the new rule. On October 13, during a session of the WTO’s general council, Hong Kong denounced the US decision and demanded again that the US drop the requirement.

On October 30, Hong Kong filed a formal complaint with the WTO, requesting dialogue with the US to resolve the labelling matter within 60 days. The rule was to take effect on November 10.

Now, if both parties can’t resolve the issue amicably, Hong Kong can ask the WTO to arbitrate.

Washington might have thought its move would have a significant impact on China. After all, according to the Hong Kong Trade Development Council, the US is Hong Kong’s second-largest export market, with US$441 million trade in the first nine months of this year.

But this might be wishful thinking. The US is only one of Hong Kong’s 170 or so export markets, none of which requires the labelling change the Trump administration seeks. There are around 7,000 manufacturing companies in the city, making everything from jewellery and watches, to electronic goods, pharmaceuticals and food, with about 400 home-grown brands which enjoy global demand.

The Hong Kong brand is recognised worldwide for quality, craftsmanship, certification and protection of intellectual property – unlike China-made products.

It is time America got back to business basics, restored Hong Kong’s trade status, and recognised the “Made in Hong Kong” label.