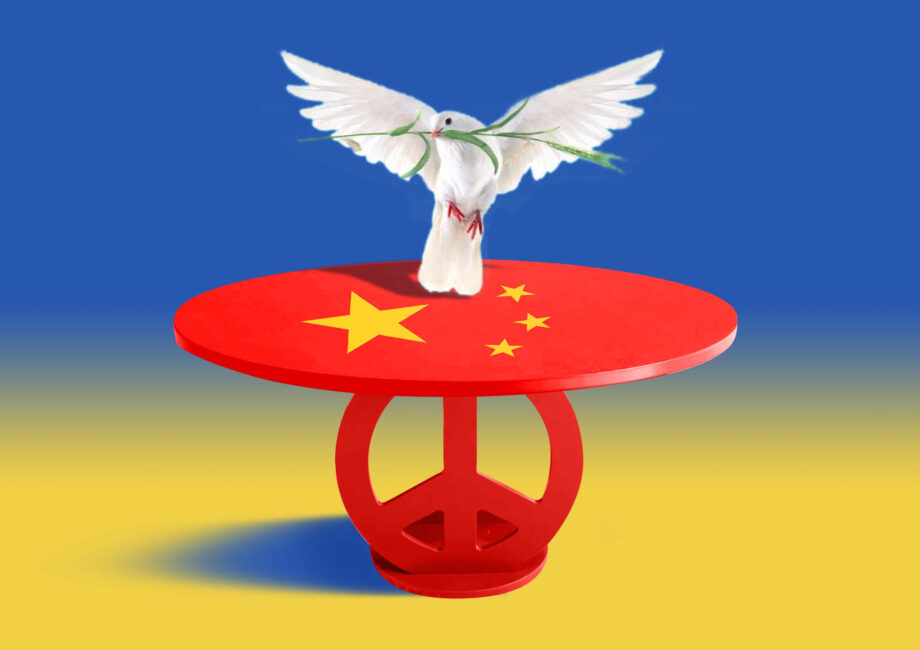 I decided to withhold the monthly release of Backspin chapters and pen this blog on China brokering an end to the Ukraine crisis.
Russia’s invasion of Ukraine has claimed thousands of civilian lives; it has rendered millions homeless, who, along with many others, have since been fleeing the country.

With no prospect of a ceasefire in sight, the situation calls for a bold initiative from a world leader for negotiating a lasting peace rather than letting this crisis evolve as a sparkplug for a third world war. China, a friend of Russia, could well be that leader.

China’s Peace Table
Hong Kong, April 13, 2022 –The Russian-Ukrainian war started because of miscalculations on both sides. So, the questions now are, who is the most-suitable world leader who can bring the warring parties to the peace table, where should they meet; and who else should be invited to participate?

Several governments have offered to mediate for a cease-fire and peace, and many political commentators and writers in both traditional and social media have put forth many suggestions.

A festive meal serves the best metaphors for political solutions, domestic and international. Chinese is my favorite, one of the main reasons for my move to Hong Kong. My 2009 book Feasting Dragon, Starving Eagle, How China Feeds on Washington and Wall Street Policy Mistakes and What We Must Do About It was described by PJ O’Rourke (RIP) as: “Fine work with Feasting Dragon. It well sums up America’s trade & foreign policy: “Eat Me!”

Here’s my suggested host, guests, venue, and menu with that culinary introduction. President Xi Jinping should be the host. He should invite Vladimir Putin, Joe Biden, Volodymyr Zelensky, and the European Union to collectively develop a solution that both Putin, Zelensky, and humanity can live with.

The five-party peace talks should take place in Istanbul, Turkey.

The opening session menu should be a five-course meal, starting with Russian vodka with Turkish mezzes, followed by Chinese Sweet and Sour Fish and American Steak, European Union beers and wines, and – a Ukrainian dessert – Peace.

Starting with a cease-fire, humanitarian aid, territorial concessions, reconstruction, and economic terms, signing a peace treaty, and removing Russian and all mercenary military forces from Ukraine.

I have a personal reason to pitch for peace in Ukraine as soon as possible.

Ukraine is my mother’s birthplace. Her father was a victim of the Jewish pogroms of the early 1900s when Russians and Ukrainians killed Jews at will – much like white Americans lynched African-Americans in their deep Southern states. My grandfather was decapitated at his home in front of his wife and children. That drove my grandmother to take my mother, one of her sisters, and two brothers to Palestine. My older two uncles, who stayed in Ukraine to complete their studies, became victims of the mass executions by the Nazis in World War II.

My father was born in Estonia, now a NATO member in the Baltics, bordering Russia. It has also suffered brutal wars at the end of Russian Cossacks bayonets and military machines for the past two centuries – and is again threatened by Russia. With the rest of his family, my father fled the Russian Empire during the Bolshevik Revolution of 1914.

Seeing hundreds, if not thousands, of innocent Ukrainian civilians, of all religions, pregnant women, children, with their mothers and grandparents, being blown to smithereens by Russian bombs and missiles and buried in mass graves; Russian soldiers, outgunned by the Ukrainian defenders, being sent back home in body bags by the thousands; families in Poland welcoming and absorbing into their homes over one million Ukrainian refugees; still, millions of Ukrainian refugees sheltering in other countries bordering Ukraine and Russia, like Moldova, the Baltic states of Latvia, Estonia and Lithuania – all this just in the first six weeks of the war, cries out for an urgent peaceful solution to this human tragedy.

The war-front tragedies are plaguing the economic front. Not just in Ukraine and Russia but worldwide, and will only worsen unless the hostilities end.

Sanctions on Russian oil and gas have seen their prices rise to levels not seen since the 1973 oil crisis.

Russia and Ukraine account for about 30 per cent of the global grain supply, resulting in the price of wheat and corn rising by more than 36 per cent since the war started on February 24, 2022.

The price of oil, gas, and food have all surged to historic highs, collectively spiking the rate of inflation. As a result, the US Consumer Price Index rose by 7.9 per cent through February, the fastest pace of annual inflation in 40 years.

According to Bloomberg, the broad stock market has gotten off to one of its worst starts since 1900. The iShares S&P GSCI Commodity-Index Trust, an exchange-traded fund that tracks a diversified group of commodities, is up 51 percent in 2022. Energy stocks have also soared.

If food prices keep rising as many experts predict, much of the world – especially the impoverished countries in Africa, Asia, and the Middle East – will face instability. It will have a devastating knock-on effect on China’s Belt and Road Initiative, starting in Ukraine.

Chances of a financial collapse, global recession, or even worse – a global economic meltdown is a real possibility if the war drags on for months.

After Ukraine and Russia, China has the most to lose the longer the war continues.

Putin should not be allowed to activate his tactical nuclear posture and go ballistic and start World War III. The atomic bomb that America dropped on Hiroshima that destroyed the city in 1945 is rated tactical by today’s standards.

A tactical nuclear weapon, or biological weapon, unleashed on any Ukrainian city will result in the dessert served at the China Peace Table being a nuclear flambé!

Now is the ideal opportunity for China to put into practice its most vocal political ideal: Non-interference in another sovereign state’s internal affairs – China’s stated geopolitical red line, especially if Beijing keeps in mind that it has had to cede more territory to Russia over the past two centuries than any other country.

The early Moscow Beijing Communist love-fest of the 1950s ended with their border clashes of 1969. The Sino-Soviet split that followed opened the door for Richard Nixon and Mao Zedong to relaunch the historical Sino-US bilateral relationship that has been mutually beneficial — politically and economically. That continues today, notwithstanding the ongoing vocal exchanges about sanctions imposed over the widening trade gap, South China Seas, Human Rights in Xinjiang, Taiwan, and democracy in Hong Kong.

With Putin, Biden, Zelensky, and the EU, Xi Jinping can and must lead and broker with Turkey’s support and guidance a treaty ending the war in Ukraine and foster global peace. The bill for the reconstruction of Ukraine, the cost of the meal, enjoyed by one-and-all, at China’s Peace Table, to be shared by all parties, and other vested interest-governments and private organizations in the interest of a new world order security architecture.

For China, a more inclusive structure than China’s current alliance with Russia, North Korea, and Iran. Turkey, Germany, Israel, Poland and Canada is a good start.