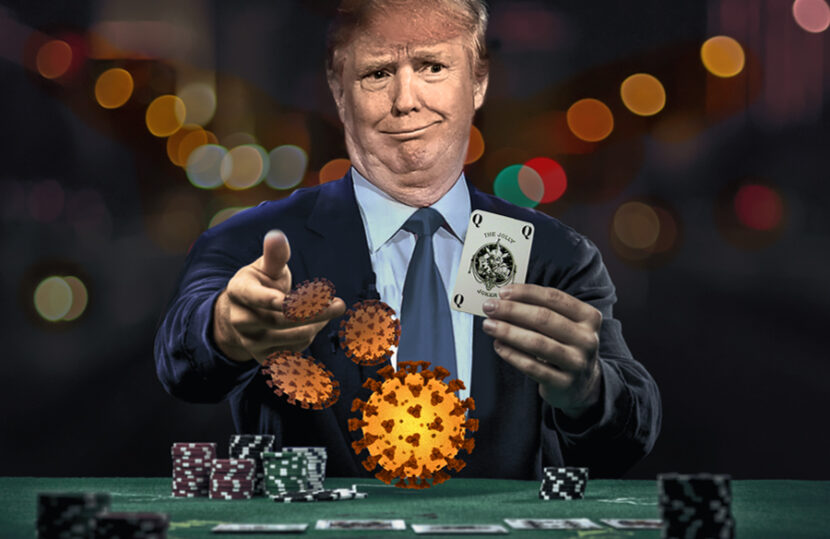 What a political card game. Former Vice President Biden and the Democrats, tried to make the Covid pandemic the centerpiece of their presidential campaign, while President Trump and the Republicans tried everything else as their political winning strategies – anything but Covid.

Then The New York Times discloses Trump’s tax returns, showing he paid $750 in taxes in 2016 and 2017, Trump’s first debate against Biden is considered a bust – and all of a sudden neither story is headline news anymore – because Covid-19 is the top media political Breaking-News story – with President Trump, First Lady Melania, top White House and Republican Party leadership, Republican members of the Senate Judiciary Committee, debate advisers and religious leaders, playing leading political Covid poker hands. A hand they all had and looked at as they tested positive.

Having worked with The Donald in New York, described in more detail in Custom Maid Spin for New World Disorder, page 238, I have witnessed first-hand, close-up, how the president Trumps his opponents.

The presidential Covid card game we are witnessing, is best represented in Las Vegas, the gambling capitol of the world that embodies the American philosophy of taking risks. Some argue that poker, and not baseball, is America’s real national game. A subject I discuss at length, even sharing experiences taking Chinese and Mongolian delegations there, teaching them the basics of capitalism, in Custom Maid Spin for New World Disorder, pages 260-261.

The Vice Presidential debate yesterday between Vice President Pence and Senator Harris – the dealers of both presidential candidates Covid cards – held back their best hands, because neither wanted to be Trumped.

The question on many voters minds, does the president have a Trump card or is he going to bust?

What a political card game America and the world are tuning into!