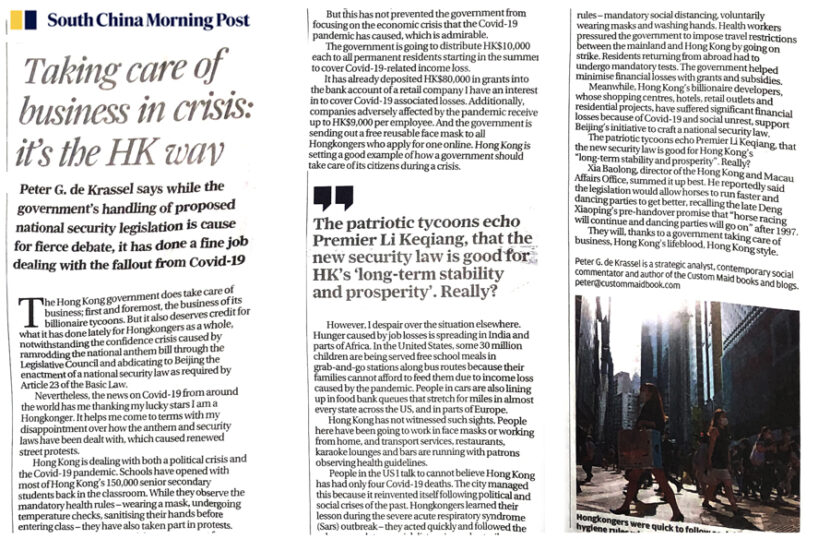 The Hong Kong government does take care of business; first and foremost, the business of its billionaire tycoons. But it also deserves credit for what it has done lately for Hongkongers as a whole, notwithstanding the confidence crisis caused by ramrodding the through the Legislative Council and the enactment of a national security law as required by Article 23 of the Basic Law.

Nevertheless, the news on Covid-19 from around the world has me thanking my lucky stars I am a Hongkonger. It helps me come to terms with my disappointment over how the anthem and security laws have been dealt with, which caused  renewed street protests.

Hong Kong is dealing with both a political crisis and the Covid-19 pandemic. Schools have opened with most of Hong Kong’s 150,000 senior secondary students. While they observe the mandatory health rules – wearing a mask, undergoing temperature checks, sanitising their hands before entering class – they have also taken part in protests.
But this has not prevented the government from focusing on the economic crisis that the Covid-19 pandemic has caused, which is admirable.
The government is going to distribute HK$10,000 each (US$1,300) to all permanent residents starting in the summer to cover Covid-19-related income loss.
It has already deposited HK$80,000 (US$10,300) in grants into the bank account of a retail company I have an interest in to cover Covid-19 associated losses. Additionally, companies adversely affected by the pandemic receive up to HK$9,000 per employee. And the government is sending out a free reusable face mask to all Hongkongers who apply for one online. Hong Kong is setting a good example of how a government should take care of its citizens during a crisis.

However, I despair over the situation elsewhere. Hunger caused by job losses is spreading in India and parts of  Africa. In the United States, some 30 million children are being served hunger-aid school meals in grab-and-go lines or along bus routes because their families cannot afford to feed them due to income loss caused by the pandemic. People in cars are also lining up in food bank queues that stretch for miles in almost every state across the US, and in parts of Europe.

Hong Kong has not witnessed sights such as these. People here have been going to work in face masks or working from home, and transport services, restaurants, karaoke lounges and bars are running with patrons observing health guidelines.
People in the US I talk to can’t believe Hong Kong has had only four Covid-19 deaths. Hong Kong managed this because it reinvented itself following political and social crises of the past. Hongkongers learned their lesson during the severe acute respiratory syndrome outbreak – they acted quickly and followed the rules – mandatory social distancing, voluntarily wearing masks and washing hands. Health workers pressured the government to impose travel restrictions between the mainland and Hong Kong by going on strike. Residents returning from abroad had to undergo mandatory tests. The government helped minimise financial losses with grants and subsidies.
Meanwhile, Hong Kong’s billionaire-developer-landlords, whose shopping malls, hotels, retail outlets and residential units have suffered significant financial losses because of Covid-19 and social unrest, support Beijing’s initiative to craft a national security law.
The patriotic tycoons – CK Asset Holdings founder Li Ka-shing, Sun Hung Kai Properties chairman Raymond Kwok Ping-luen, New World Development chairman Henry Cheng Kar-shun, Henderson Land Development chairman Peter Lee Ka-kit, Sino Land chairman Robert Ng Chee Siong, and Peter Woo Kwong-ching, former chairman of Wheelock and Company and Wharf Holdings – echo Chinese Premier Li Keqiang, that the new security law is good for Hong Kong’s “long-term stability and prosperity”. Really?
Xia Baolong, director of the Hong Kong and Macau Affairs Office, summed it up best. He reportedly said the legislation would allow horses to run faster and dancing parties to get better, recalling the late Deng Xiaoping’s pre-handover promise that “horse racing will continue and dancing parties will go on” after 1997.

They will indeed, thanks to a government taking care of business, Hong Kong’s lifeblood, Hong Kong style.