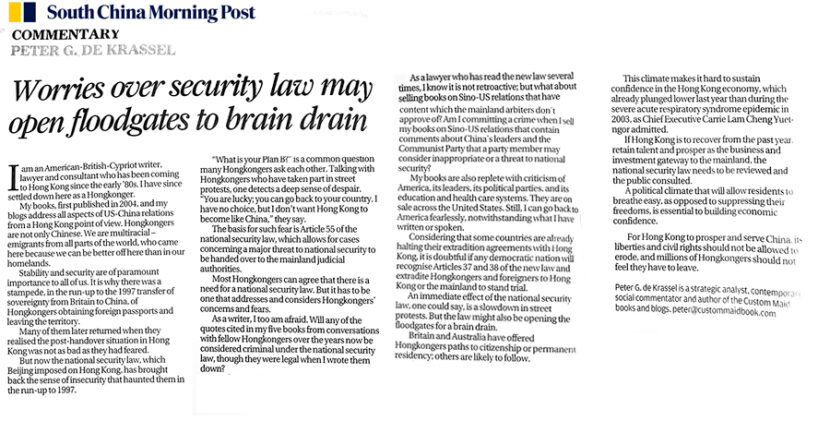 I am an American-British-Cypriot writer, lawyer and consultant who has been coming to Hong Kong since the early ’80s. I have since settled down here as a Hongkonger.

My books, first published in 2004, and my blogs address all aspects of US-China relations from a Hong Kong point of view. Hongkongers are not only Chinese. We are multiracial – emigrants from all parts of the world, who came here because we can be better off here than in our homelands.

Stability and security are of paramount importance to all of us. It is why there was a stampede, in the run-up to the 1997 transfer of sovereignty, of Hongkongers obtaining foreign passports and leaving the territory.

Many of them later returned when they realized the post-handover situation in Hong Kong was not as bad as they had feared.

But now the national security law, which Beijing imposed on Hong Kong, has brought back the sense of insecurity that haunted them in the run-up to 1997.

“What is your Plan B?” is a common question many Hongkongers ask each other. Talking with Hongkongers who have taken part in street protests, one detects a deep sense of despair. “You are lucky; you can go back to your country. I have no choice, but I don’t want Hong Kong to become like China,” they say.

Most Hongkongers can agree that there is a need for a national security law. But it has to be one that addresses and considers Hongkongers’ concerns and fears.

As a writer, I too am afraid. Will any of the quotes cited in my five books from conversations with fellow Hongkongers over the years now be considered criminal under the national security law, though they were legal when I wrote them down?

As a lawyer who has read the new law several times, I know it is not retroactive; but what about selling books on Sino-US relations that have content which the mainland arbiters don’t approve of? Am I committing a crime when I sell my books on Sino-US relations that contain comments about China’s leaders and the Communist Party that a party member may consider inappropriate or a threat to national security?

My books are also replete with criticism of America, its leaders, its political parties, and its education and health care systems. They are on sale across the United States. Still, I can go back to America fearlessly, notwithstanding what I have written or spoken.

Considering that some countries are already halting their extradition agreements with Hong Kong, it is doubtful if any democratic nation will recognize Articles 37 and 38 of the new law and extradite Hongkongers and foreigners to Hong Kong or China to stand trial.

An immediate effect of the national security law, one could say, is a slowdown in street protests. But the law might also be opening the floodgates for a brain drain.

Britain and Australia have offered Hongkongers paths to citizenship or permanent residency; others are likely to follow.

This climate makes it hard to sustain confidence in the Hong Kong economy, which already plunged lower last year than during the severe acute respiratory syndrome epidemic in 2003, as Chief Executive Carrie Lam Cheng Yuet-ngor admitted.

If Hong Kong is to recover from the past year, retain talent and prosper as the business and investment gateway to the mainland, the national security law needs to be reviewed and the public consulted.

A political climate that will allow residents to breathe easy, as opposed to suppressing their freedoms, is essential to building economic confidence.

For Hong Kong to prosper and serve China, its liberties and civil rights should not be allowed to erode, and millions of Hongkongers should not feel they have to leave.

Peter G. de Krassel is a strategic analyst, contemporary social commentator and author of the Custom Maid books and blogs.